Its been a while since I posted anything of interest, my interests have diverted from Star Trek and modern Sci-fi to the older era, The Jules Verne stories in particular, specifically in this case 20000 Leagues Under the Sea and the Nautilus, as a child I first discovered the story in Disney´s excellent and entertaining film in the 1954 film of the same name.

Mobilis in mobili is the motto used to describe the Nautilus by Captain Nemo (or Prince Dakkar) as he reveals himself to be in a follow-up book by Jules Verne called “The Mysterious Island”.

Its described as been 70 meter long and 8 meters wide and I am been building the model to that scale or as close as I can get….. no height is given so I have a free had there…. The Nautilus is also meant to have Hydroplanes to the side somewhere to rise and lower the sub as needed like modern subs.

It’s hard to move away from the fantastic design used in the Disney film, designed by Harper Goff who was inspired by the Shark and Crocodile for his approach and very Victorian in feel, I think it works very, very well. 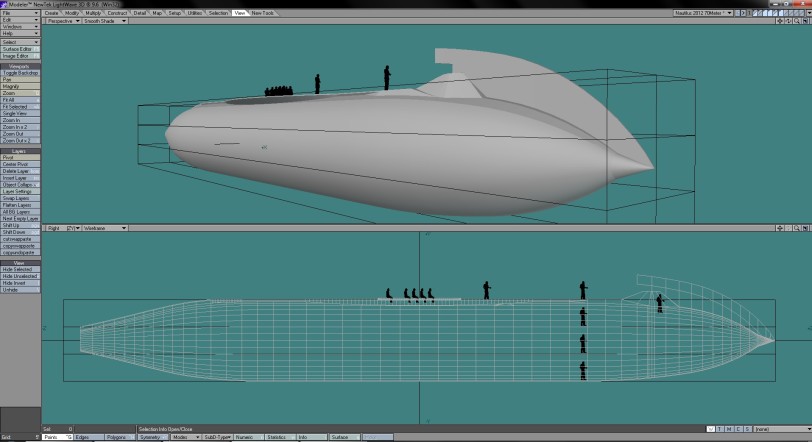 Non the less, This is my design so far. where my only real Harper Goff ref is the curved spar used to ram any ships, serving the need to protect the control room from directly hitting the bottom of a ship’s keel. I also built a small platform which i slightly curved and in the centre of that a small boat position. my problem is making a simple cylinder interesting ….. not that easy …..

7 thoughts on “Mobilis in mobili Part 1”