This is my second model I ever made also in 2006 for a BSG fan-film that never saw light. A real disappointment when it disappeared from the web. But its a variation on the design in the original Battlestar Galactica series, simply there is not enough images of the Rag Tag ships to be sure how they are constructed. 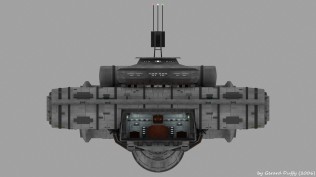 The textures are not mine, they are by Marc-Laurent Magnier (Manga) which I had permission to use, but not to good effect on my part and I could have done a better job.

My name is Gerard Duffy I like to create CGI models & original designs in Lightwave3d most based on Film & TV shows check out each of the designs in CATEGORIES selection below this profile. I no longer participate in Fan film efforts
View all posts by gmd3d →
This entry was posted in Ragtag Ships and tagged 3D models, Battlestar Galactica, Celestra, CGI, Classic Battlestar Galactica, Foundation3d, Lightwave3d, taraniscgi.wordpress.com. Bookmark the permalink.